Pride and Prejudice at Lyme Hall

Every month I go and visit Mum who is in a nursing home in Manchester. Weather permitting we always go out and about. This time was no exception as the weather was perfect for a jaunt in the country. I decided to take both Mum and my daughter to Lyme Park in Cheshire. Mum and I had visited there almost 50 years ago so I could hardly say I knew the area. Laura was delighted when I told her it was where the BBC production of Pride and Prejudice was filmed (the one with Colin Firth).

All the outdoor scenes were filmed here. Who could forget the scene of Mr D'Arcy diving into the lake! It was a feast for the eyes. 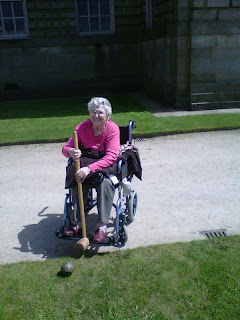 London was a port long before a city had been established. It was the Romans in 50AD who settled on the banks of the Thames calling the settlement Londinium. It then developed into a major trading and ship building port through history from the Saxons, Normans and Tudors. Walking along the shore by the river you can still find clay pipes dating back hundreds of years. The Thames is a tidal river and its force and tidal currents should never be forgotten. However, I did take the risk(!) and climbed down to the foreshore to see if I could find anything.

﻿ By 1576 London was the world's foremost trading port. By the 18th century the port was struggling to cope. The docks were expanding rapidly. Smaller boats carrying coal and grain from other British ports, still used riverside whaves, but congestion on the Thames led to purpose built docks large enough for ocean going vessels. Walking by the Thames today you can see many of the warehouses rising like huge cliffs from the banks of the Thames. These days they have been converted into large apartments, with balconies overlooking the Thames. 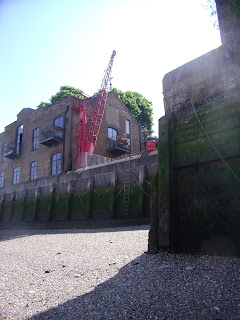 Along the banks of the Thames near Tower Bridge is a riverside amphitheatre known as The Scoop. It holds free concerts and events there throughout the Summer. As I was walking past today I noticed a small bronze sculpture which I had never noticed before. Not sure whether it is new or whether I just didn't notice it because possibly tourists (or bloggers) were always gathered around it taking photos! Anyway it fascinated me as it was a small 3D model of the area. 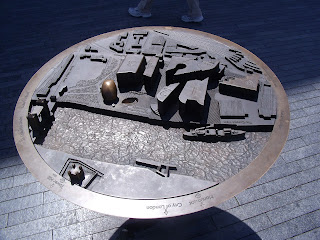 Looking at it closely you can see The Thames with HMS Belfast moored just in front of Hay's Galleria. The bridge crossing the Thames is Tower Bridge and on the North side of the Thames there is The Tower of London. Crossing the river to the South you have  a bronze sphere which represents the Greater London council building. Next to that looking like a hole in the ground is The Scoop. I stood a little way from the model and took my own 360 degree views:-
﻿﻿﻿﻿﻿﻿

After a couple more days in Tibet 7 of us booked a mini bus to take us out of the city into the countryside. We were only allowed to do this if accompanied by a guide. Fortunately we got a Tibetan guide rather than our usual Chinese guide. We found out later that our Chinese guide had reported the Tibetan guide for not speaking clearly to us! We were going to Nantsu Lake which is the  highest salt lake in the world at 4718m. 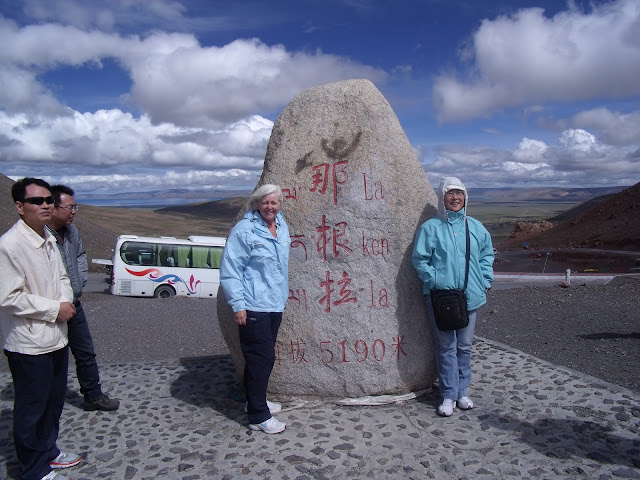 The lake was about 230km south of Llasa so quite a journey. To get to the lake we had to cross the Largen La pass which was at 5190m. It wasn't long after this photo was taken that I had to have oxygen. As I had suffered a lot since arriving in Tibet thankfully I had taken a cylinder with me.
The scenery was spectacular and I was able to see the snow capped mountains. I was very surprised to learn that the snow line is about 6500m, much higher than I expected. Crossing the high plateaus we saw lots of yaks and mountain goats grazing on the mountainside. We also passed a large gathering of nomad tribes who had got together for a festival and had set up their camp which looked like a small city of tents. Our guide stopped the minibus near a couple of nomad tents and asked if we could go inside.
﻿ ﻿


The nomads are totally dependent upon the yak for their shelter, warmth and food: milk, cheese, butter, beer (made from butter which is absolutely vile - in my opinion!) and eventually meat which they dry so it keeps better. The tribes are being encouraged to go to the towns during the winter so that the children can attend school. China has built numerous schools and there is free education for all children. A number of tribes are not happy about going to the towns for lengthy periods as there is nowhere for them to look after their herds of yak so for many life continues as it always has  over the centuries.

We said our goodbyes and continued our journey to the lake.

In 2010 I travelled to China and Tibet. I had visited Nepal in the early 70s and had been able to travel widely as I was staying with a friend who lived there and he was able to get me a special permit to allow access to areas normally out of bounds to tourists. However, although we travelled to the border with Tibet we couldn't gain entry as it was occupied by the Chinese. It was a place I longed to see. The book 'Seven years in Tibet' by Heinrich Heller had captivated me when I was young so I was delighted when I went to China  in 2010 and got a visa to see Tibet.

However, my disappointment knew no bounds! There were no snow covered mountains surrounding Llasa as I had imagined. The town looked very modern and Chinese with little Tibetan heritage to be seen. The streets were patrolled by groups of riot police complete with automatic rifles and helmets.The large parade ground in front of the Potala Palace and the high rise flats dispelled my wonderful images of the city of Lhasa.


But once inside the Palace, the home of the Dalai Lama, I was not disappointed. It is an impressive building - 13 floors high. Inside it has a myriad of rooms, many displaying Buddhas and icons. There was a strong smell of incense coming I think from the burning of Juniper branches. All around us were small candles being burnt in yak oil/butter. These were continually being tendered probably because of the risk of fire. Everywhere you looked, stuffed into every conceivable crevisse and surface there were yuan notes that had been put there as offerings. It was important for people to gain as many credits as possible in their pursuance of Nirvana. Apparently the money did not go to the Palace but to the State. We also discovered that although we were allowed into the Potala Palace it was against the law to own or display a photo of the Dalai Lama.
Posted by Fun60 at 16:28 5 comments:

Walking around the city of London the influence of Wren is everywhere from the Dome of St Paul's Cathedral to the Royal Chelsea hospital for retired soldiers. In 1666, the Great Fire of London destroyed much of the medieval city, providing a huge opportunity for Wren. He produced ambitious plans for rebuilding the whole area but they were rejected, partly because property owners insisted on keeping the sites of their destroyed buildings. However, Wren went on to design 51 new city churches, as well as the new St Paul's Cathedral.
Just down the road from St Paul's is the remains of another church: 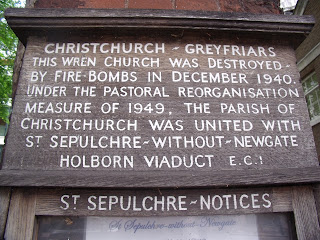 Although Christchuch of Greyfriars was bombed during WW2 the remains are still there. There is a feeling of peace and serenity within the grounds of the church and is used today as a retreat from the stress and pace of citylife. 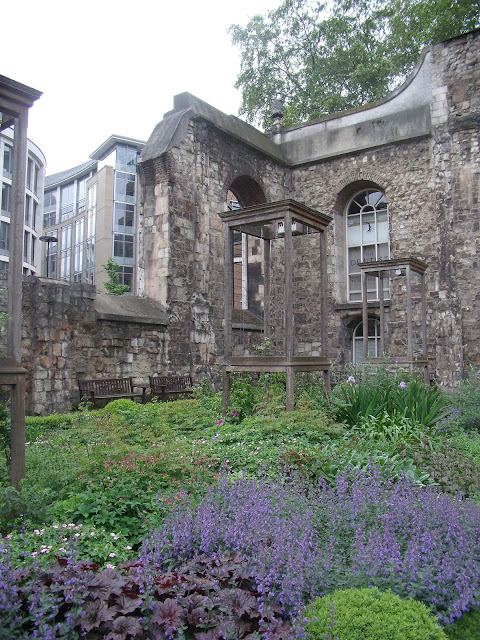 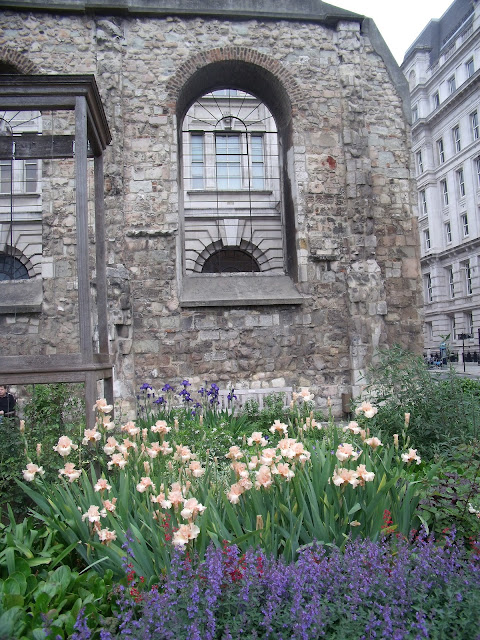 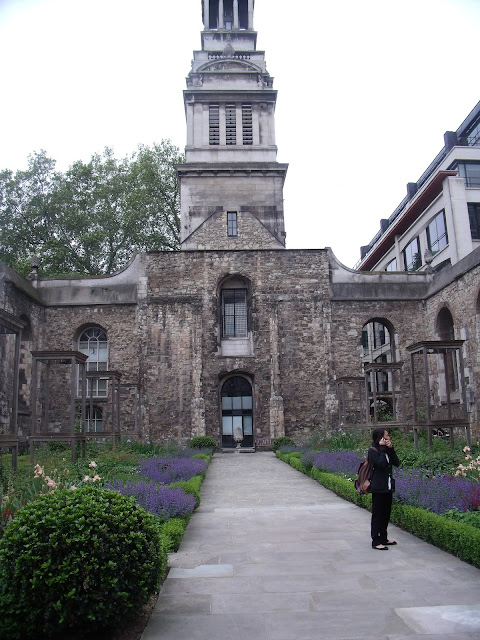 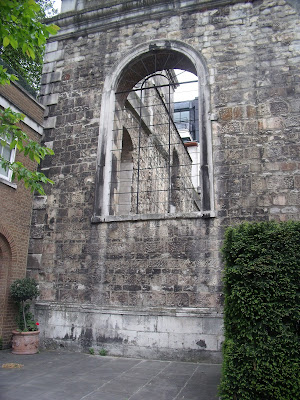 Wren died on 25 February 1723. His gravestone in St Paul's Cathedral features the Latin inscription which translates as: 'If you seek his memorial, look about you.'


Everywhere you look in London you see red, white and blue. At the beginning of next month we will be celebrating the Queen's Diamond Jubilee. An amazing achievement. There will be many different activities taking place such as a huge river pageant of 1000 boats escorting the Queen's boat along the River Thames. There is also a huge concert outside Buckingham Palce. Unfortunately I couldn't get tickets for that so will probably end up watching that one on TV.

Today I went to Hythe in Kent . A small village by the sea. The shop windows were awash with the red, white and blue displays.


Hythe, just has the one main street with a very warm, friendly feel about it. No doubt there will be some lively street parties going on there during the Jubilee weekend. 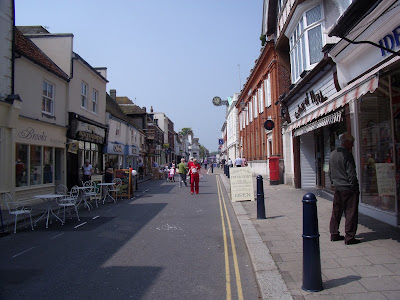