I awoke to a beautiful cloudless blue sky and rather than go to the gym as I usually do on a Sunday morning, I decided to go for a walk. Today is Remembrance Sunday and as I wandered through a housing estate, on my way to Greenwich Park, I came across a small group of people standing around a small war memorial. I was surprised that there was a local service being carried out by this small memorial. Normally the services are at the larger ones. Each village, town and city will be conducting their own memorial services today to remember all those who lost their lives during active service. I stayed to listen and watch the laying of the wreath. Not something I would photograph.

Once in Greenwich Park I made for the observatory where you have a wonderful view of London. 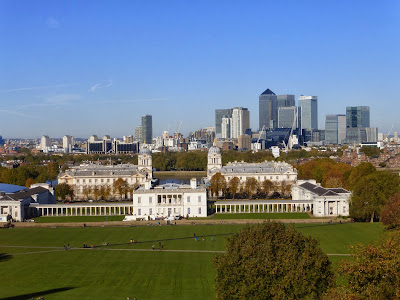 At the bottom of the hill is the Queen's House which was closed today as they were filming - again! The buildings in the distance are centred around Canary Wharf on the Isle of Dogs and I decided to walk across to see them. This meant crossing the River Thames. As there is no bridge at Greenwich I went through the foot tunnel. Not the most attractive of places but it serves a purpose. 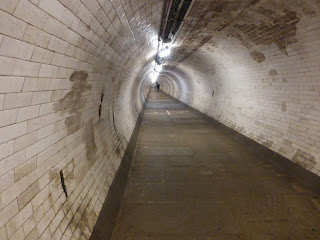 On the other side of the river I walked around a few of the docks taking lots of photos of course. But at West India dock I noticed there was a Royal Navy ship moored there. So, needless to say, I had to go and have a look. 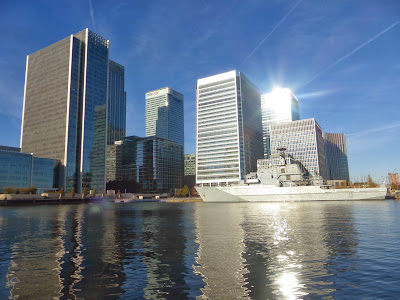 It was HMS Tyne. The gangplank was down and there didn't seem to be a notice saying you couldn't go up to the ship. So I made my way towards the ship but within seconds an officer and an armed marine came to speak to me. Apparently there had been a Remembrance service on the ship and visitors had been allowed to look around but I was too late. I said how sorry I was to have missed such a wonderful opportunity. The officer asked me to wait a moment whilst he spoke to someone. He returned with another officer who said he would be glad to escort me around the ship. What a result! 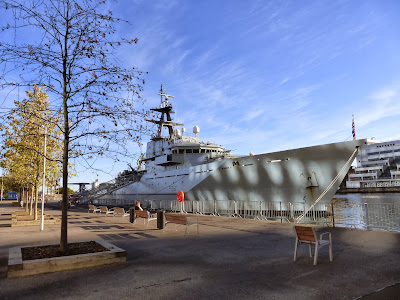 There were armed guards everywhere and so I did not think it appropriate to take photos on board. The tour was too interesting anyway. This vessel patrols the coast of Britain checking on fishing vessels to make sure they are using the correct equipment and only taking the legal quota and size of fish. They also check vessels for illegal immigrants and drugs etc when needed. 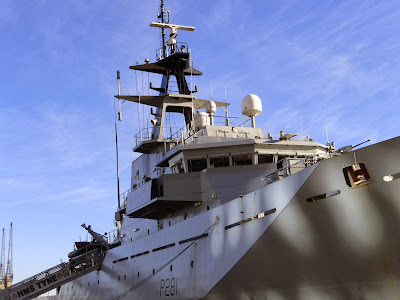 I was taken through the ship to see their living quarters and rest area and then up to the Bridge where I was shown  how they navigate and steer the vessel. It was a technological wonder. No maps now. Although I was told they did carry nautical maps and all the officers were able to navigate using them if necessary. Next we went into the galley and met the chef who had just come back from a weekend's leave. It was his responsibility to feed the men on a budget of £2.65 per man per day. I was amazed at how low the figure was but he assured me it was possible. I had quite a long chat to the chef who explained that his other roles included being the medic on board as well as a trained firefighter.


My tour had come to an end and it was time to thank my young escort for the wonderful informative tour he had given me. My late brother was in the Royal Navy for a number of years but this was the first time I had ever been on a naval vessel so I felt very priveledged to have been granted the opportunity. They were preparing the ship for their next tour of duty which would be starting in the early hours of the morning. I wish all the men on the HMS Tyne a safe and successful trip and many thanks for the kindness shown to me today.
Posted by Fun60 at 22:58