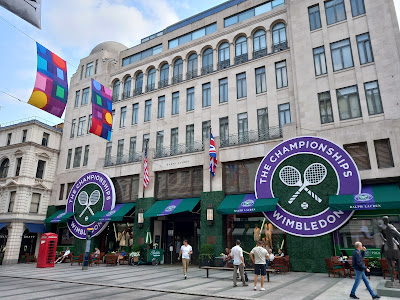 Decorations outside the Ralph Lauren shop on Bond Street. Wimbledon fortnight starts today, opening to a capacity crowd for the first time since 2019. I haven't got a ticket this year so will be glued to the TV watching all the action. Of course, Wimbledon is not without controversy this year as unlike the other Grand Slams it has decided to ban players from Russia and Belarus because of the war in Ukraine. I know one concern was the use of propaganda by Russia if one of their players won the championship. However, I do think they could have come up with an alternative such as no presentation of trophies to Russians or media interviews. But then sporting events have to be at the bottom of the agenda when you consider the suffering going on in Ukraine today.
Sharing with Through the lens