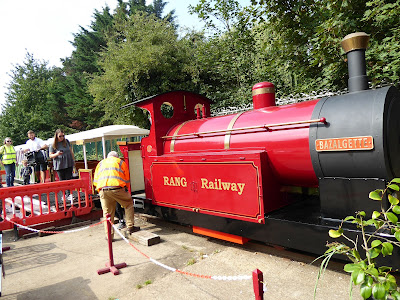 September is the time for Open House when the public have an opportunity to visit buildings which are normally not accessible. With the ongoing pandemic the format of Open House has had to change with bookings for most buildings necessary, allowing fewer people entry. Last weekend I was lucky enough to get a ticket to see Crossness Pumping station or 'The Cathedral in the Marshes'. Built in 1865 as part of  the Victorian London Sewerage system it is now a Grade 1 listed industrial, heritage site. Entering the site I was delighted to see this steam train which takes visitors to the engine house. 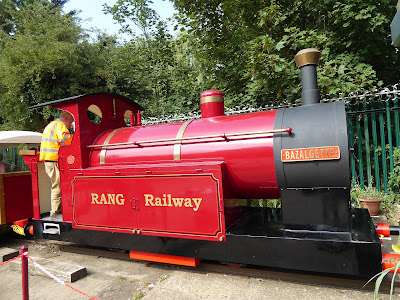 The first railway at Crossness was built to deliver materials across the marshes to the pumping station and was a standard gauge of four and a half feet. This one has been recently built by enthusiasts and volunteers just for passengers and is a two feet narrow gauge. I had no idea it was here so it was a very pleasant surprise. 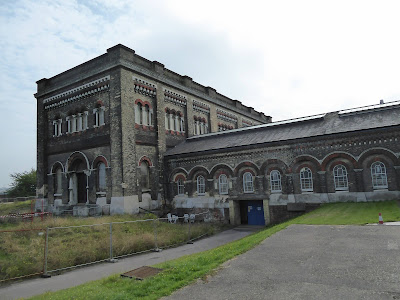 Crossness sewage works was a masterpiece of Victorian engineering with elaborate ironwork. 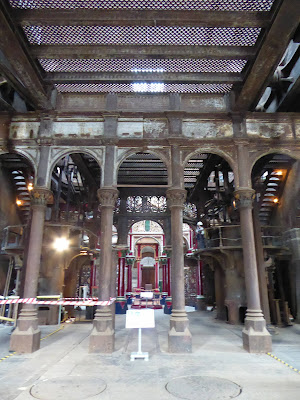 From 1800 to 1850 London's population increased from 1.1 million to 2.7 million. Disease was rife with over 10,000 Londoners dying from Cholera in the 1853-54 epidemic. Four years later in the hot summer of 1858, the Great Stink, hung over the city. It was so bad that plans were made to evacuate the Houses of Parliament which run alongside the river Thames. The Metropolitan Board of Works gave the task of developing a new sewerage system to its chief engineer, Sir Joseph Bazalgette. 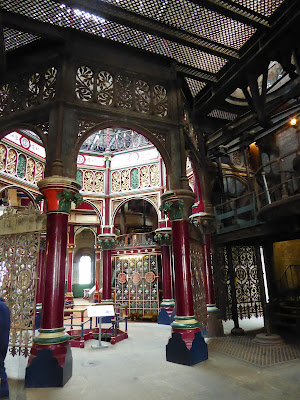 Bazalgette devised a system of three massive intercepting sewers built parallel to the river. They were built underground and diverted the foul sewage water to great holding tanks here at Crossness and another pumping station at Abbey Mills in West Ham. The sewage would be held there and then pumped into the river on the ebbing tide. 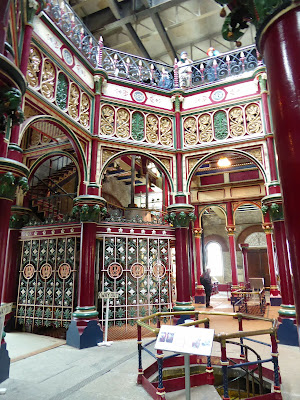 Crossness pumping station was opened in 1865 looking magnificent with its colourful ironwork. 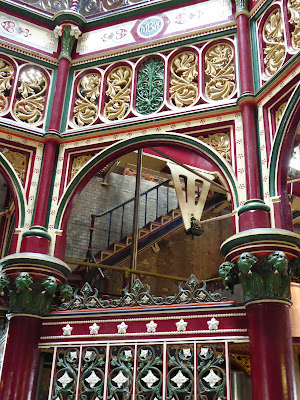 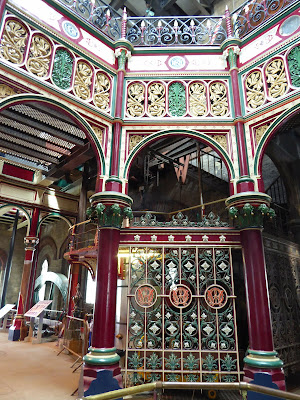 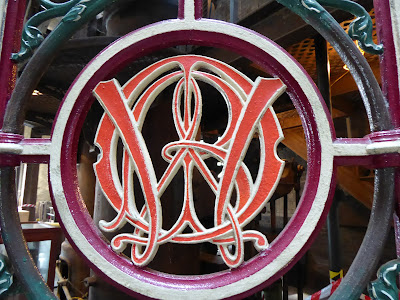 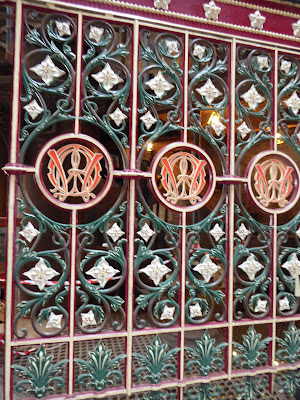 Metropolitan Board of Works. 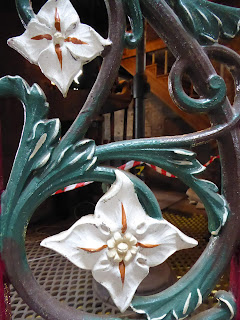 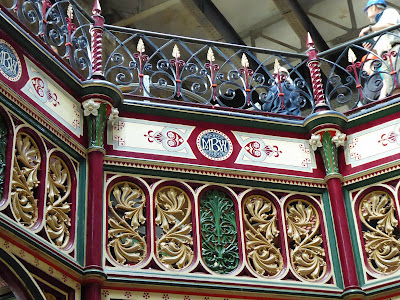 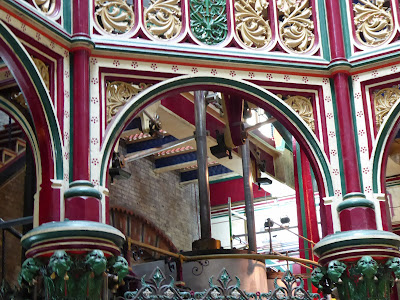 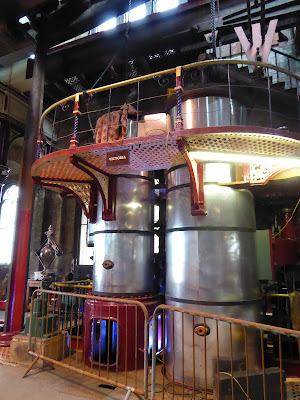 The engine house contained four beam engines by James Watt & Co named Prince Consort, Victoria, Albert and Alexandra. This one is Victoria. The engines had 52 ton flywheels and 47 ton beams and are believed to be the largest rotative beam engines in the world. 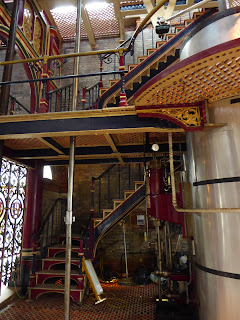 An iron staircase led to the upper floor 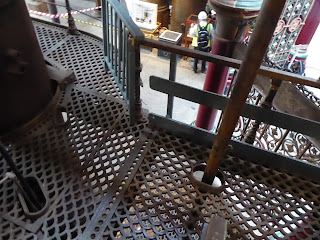 I'm not a lover of heights and being able to see the ground through the floor always gives me hand sweats and a need to grip any available hand rail. 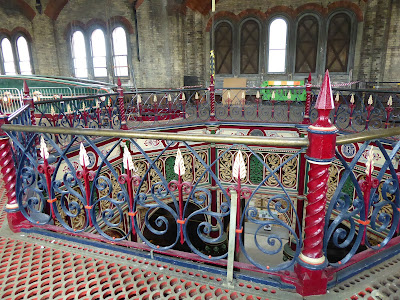 It was well worth it though to be able to look closely at the decorative ironwork from above. 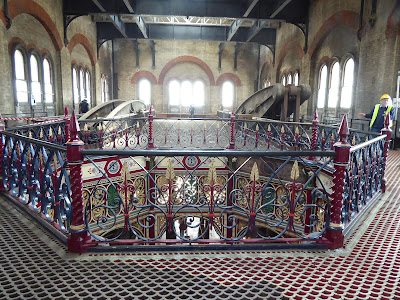 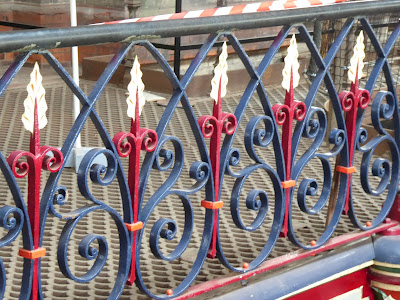 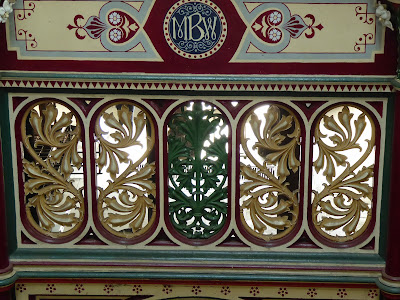 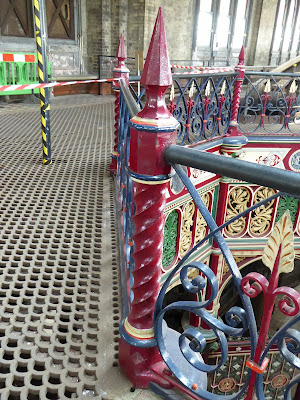 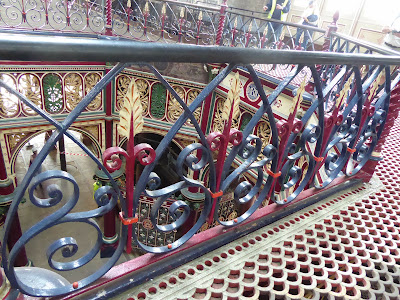 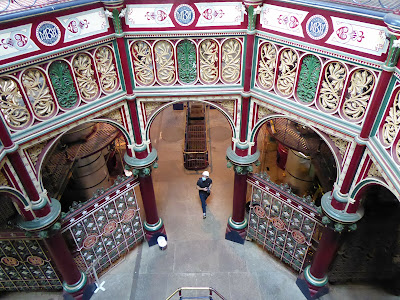 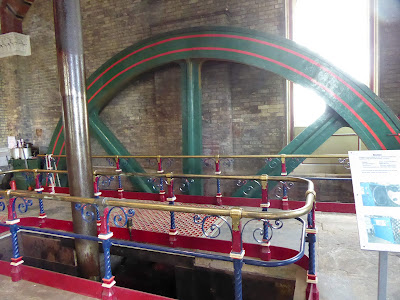 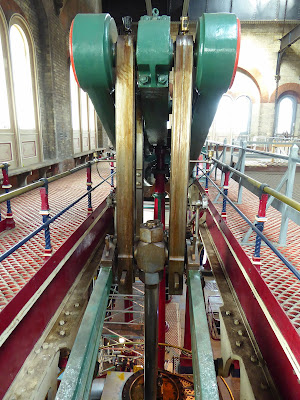 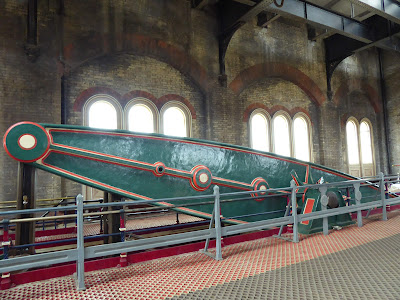 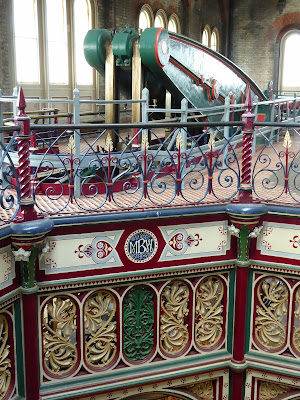 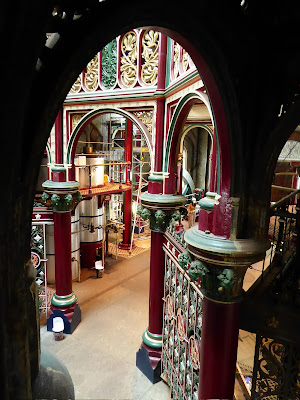 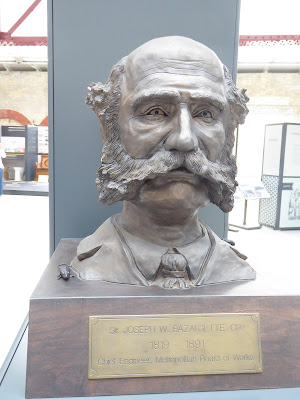 In 1882, A Royal Commission was appointed to assess the state of  the Thames and sewage treatment. The commission's report recommended that untreated sewage should no longer be pumped out into the Thames. In future solid matter would be 'settled out' and disposed of  in the North Sea. Six sludge vessels were ordered. The first, the Bazalgette, was commissioned in June 1887. I bet he was thrilled to have a sludge vessel named after him. Dumping sewage in the sea continued for another hundred years until the1990s. By then, Thames Water developed two sludge powered generators at its largest sewage works in Crossness and Barking. Sewage sludge is dried into blocks called (for some unknown reason) cake. These cakes are burned to generate heat and drive a steam turbine which creates electricity. 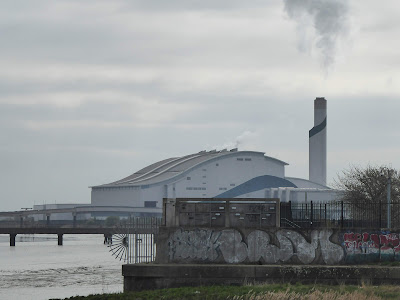 This is the modern sewage works just along the river from here, where the sewage is burnt to produce electricity.
Sharing with Our World Tuesday Tuesday's Treasures Through my Lens
Posted by Fun60 at 15:07